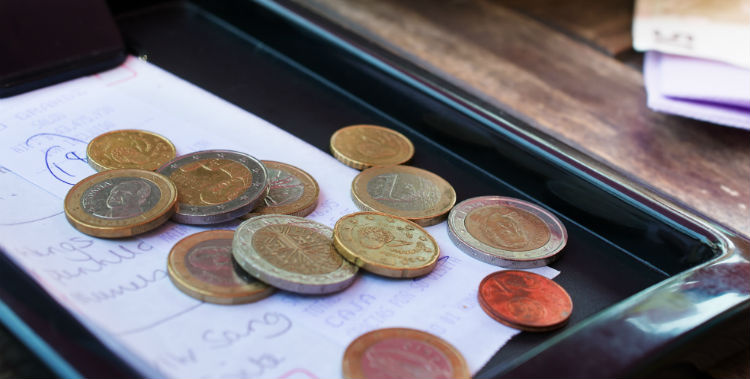 You’ve just finished a delicious meal in a restaurant on holiday and are now ready to pay your bill. You take out the notes you were given when you exchanged your money, and are slowly counting up the amount on the bill making sure you’ve used the correct coins. Then the thought pops into your head: should I tip?

Down under is a region where there aren’t any stringent tipping rules and locals aren’t known to tip. In Australia, tipping is seen as something that rewards exceptional service – so don’t feel you have to leave money if you’ve had average service.

As Bulgaria becomes a more popular holiday destination, it is developing a tipping style similar to that of Western Europe. It’s not an obligation but it is considered polite to tip 10 percent to spa therapists, tour guides and taxi drivers. However in a hotel it is expected you will tip low-earning members of staff such as housekeepers and porters.

Canada’s tipping etiquette doesn’t differ much from the United States. At restaurants a 15 to 20 percent tip is expected and you should leave something daily for room service, but only about $5. Porters usually get $1 per bag. Taxi drivers are usually tipped 10 to 15 percent.

Because a lot of Caribbean resorts are all inclusive, the service charge will be included. If you’re paying for something which isn’t included it’s polite to leave a small tip, or if a member of staff has went above and beyond for you.

If you’re out for a quick coffee or a drink, it’s acceptable to just leave the change. The same procedure applies for taxi drivers. However, if you’re having a nice dinner at an upmarket restaurant leave a tip which is 10 to 15 percent of the bill.

Due to Cyprus popularity as a holiday destination, service staff have become accommodated to receiving tips from holidaymakers. A reasonable tip is considered 10 percent but check if it’s already on the bill. However, even if the bill includes a service charge it is appreciated if a few euros are left behind.

In Dubai, the government insists that hotels and restaurants must include a service charge in the official bill, and you’re free to add something extra. Parking valets and porters should be tipped about ten dirhams but cab drivers won’t expect anything (though it’s nice to round-up).

Greece generally has the same tipping rules as other European destinations, which is usually 10 percent of the bill. In Greece, however, it is also customary to tip on yacht tours.

Some of India’s upmarket restaurants will include a service charge in the bill, but if it’s not included then it’s customary to tip 10 percent. At the hotel it’s common to tip the porter 50 rupees and housekeepers a bit more. If you hire a private car, you should tip your driver 400 to 500 rupees a day, however taxi and rickshaw drivers won’t anticipate a tip.

Tipping isn’t commonplace in Italy, with gondoliers sometimes refusing tips. In a restaurant leave as close to 10 per cent as you can but nothing more.

Japan is largely a non-tipping society and it can be considered extremely rude. However, if you choose to stay at a Japanese inn – also known as a ryokan – you provide the room keeper with 5,000 yen for one nights stay in an envelope.

Similar to other Mediterranean countries, a tip of 10 percent is appreciated but not mandatory. Sometimes it will already be included in the bill.

Cash is preferred in all tipping situations, including restaurants where it is 10 – 15 per cent of the bill. At a Mexican hotel it is 10 pesos per bag for the porter and 20 pesos per night for housekeeping. In Mexico it’s also customary to tip gas station attendants about 5 pesos per fill-up.

Tipping is generally not commonplace among locals, though tourists are known to tip. If the service has been exceptional it’s nice to leave 10 percent but the waiter won’t be offended if you’re not able to leave a few extra cents on the table.

Portugal has a similar tipping etiquette to its Spanish neighbour: it’s polite but not essential. It’s usually reserved for situations where service has been exceptional.

A service charge is usually included in the bill however in Qatar it’s not usually divided up between service staff. So if you want to ensure your server receives something on top of their wages leave something extra in cash. A tip of 5 -10 Riyals is usually appreciated by taxi drivers.

Spain is another country where tipping isn’t considered a necessity. If the service has been of high quality, leave a 10 percent tip in cash.

In Thailand it is customary to tip $1 in most circumstances. At restaurants it’s $1 per diner, and to porters is $1 for each bag (though you’re not expected to tip the housekeepers). If you’re getting a taxi it’s also $1 however if you’re in a private cab it will be $2 and $10 for tour guides.