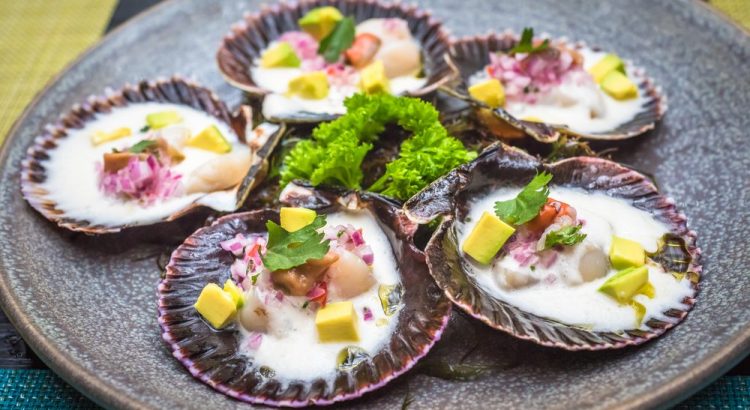 Home to one of the most biodiverse landscapes in the world, Peru has been harvesting one of the world’s freshest and most unique culinary scenes for over a millennia. Not to mention that Peru is also a cultural melting pot of native and European flavours.

Each region in Peru boasts its own local cuisine with unique flavours, so when you’re on a tour of Peru you’ll be met with something new at every stop. Whether you’re relaxing after climbing Machu Picchu, exploring the cosmopolitan landscape of Lima, or absorbing the breath-taking sights of Lake Titicaca – you’ll find an exceptional local dish to accompany it.

Here are just six reasons why Peru is one of the world’s most exciting foodie destinations.

With the waters of the Pacific Ocean right on its doorstep, seafood has been a fundamental part of Peruvian cuisine for 5,000 years. The Northern Coast, in particular, offers a delightful mix to satisfy the tastes of even the most discerning visitors.

The Northern Coast’s most prized dish is cebiches stews, which combine seafood with sour and spicy seasoning, as well as aromatic herbs. Cebiches are made with fish, seafood or black shellfish, all marinated in lemon juice, hot peppers, salt, and served with onions, sweet potatoes and corn in kernels or on the cob.

You’ll also find a lot of ceviche being served in the capital, Lima.

If you love food of the carnivorous variety, and don’t mind taste-testing something a bit adventurous, then you’ll find what you’re looking for in Peru.

Guinea pig is one of the Andean region’s most popular sources of meat. The traditional recipe calls for stuffing the whole animal with local herbs, then roasting it over an open wood fire and serving it with potatoes. You’ll also find numerous restaurants in Cusco and Lima serving guinea pig in a variety of ways from braising to deep-drying.

Alpaca is another meat that has a long history in the Andean Highlands. You’ll also find it served in several restaurants in the tourist cities, and it has a similar taste to buffalo and other grass-fed meats.

It’s also not uncommon to find alpaca or beef heart on the menu of street food vendors. Usually it is served on skewers, with sliced onion or potato, and drizzled with lime.

Native to the majestic Amazon Basin, native South Americans and cacao have a relationship that stretches back 3,000 years. Peru is 60% tropical forest, and it’s this unique setting and the use of traditional harvesting that creates the exceptional flavour and aroma that Peruvian chocolate is known for.

The cacao bean is more than just food to Peruvian natives. It has nutritional and therapeutic qualities, which includes improving digestion and contributing to good cardiovascular health.

Peruvian cuisine has primarily been influenced by native and Spanish flavours, but there’s a few other cultures that have arrived on Peru’s shores and left behind their own flavours. Most notably African and Chinese cultures.

The African influence brought the offal used for the famous anticuchos, which are skewered cow hearts grilled over a charcoal fire. As well as cau cau, a stew of tripe and potatoes. Finally, African influence also brought tacu tacu, refried beans mixed with rice and topped or stuffed with meats or seafood.

In recent decades, several Peruvian chefs have made attempts to recreate the traditional Andean cuisine of Peru’s pre-Hispanic past. From this, a new culinary style call Novo-Andean cuisine has been born, which draws inspiration from the culinary traditions and combines them with modern international cuisine.

You’ll find Novo-Andean cuisine at 5 star hotels and specialty restaurants in the city of Lima.

When dining in a restaurant, ask for a glass of pisco to accompany your meal. It’s a colourless or yellowish-to-amber coloured brandy produced in the winemaking regions of Peru and Chile – and dates back to the 16th Century. Its sole ingredient is grapes and Peruvian pisco is produced only using copper pot stills (like single malt Scotch whiskies) rather than continuous stills like most vodkas.

There are eight types of grape that produce Peruvian Pisco and the spirit can fall into one of three categories:

Pisco is served in its own dedicated tulip-shaped glass, so that the unique scent of the drink can also become part of the experience.

If you’ve been to Peru, what was your favourite dish? What do you recommend visitors try first?